To get to Madikeri, Alex & I had to catch another early bus. I mentioned my first reason for liking bus transportation the other day: the ability to just hop on. This morning is my second: good food can be found at the bus stations. Thanks to my ample fat reserve to provide energy in times of scarcity: my big butt. Reason #2 is that it makes my boyfriend sane and happy because Alex is always worried he might starve if he doesn’t eat something every 2-4 hours. Given there are no places open at this hour to forge, the bus station had us covered with idlis and vadas with high enough calorie content to sustain us to sit on a bus for a few hours.

Today, Alex & I sat on different sides of the bus so we could both get a window seat. Yes, we could sit on the same side and look out the window but who would watch the other side of the bus? Plus, a girl needs some down time and peace and quiet!

The journey was beautiful. We were able to watch the sun rise. The ride took us away from the coast and into the Western Ghats. It surprised me to see palm and banana trees at such high elevations. Alex later wondered if some were planted for palm oil because many were in straight rows. Rubber production appeared to be important in this region as well. We passed the International Spice Research facility. 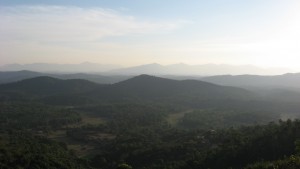 The closer we got to Madikeri, we were rewarded with beautiful mountainous scenery but the roads became treacherous. I now understand the reason for the strike:  hazardous road conditions. Passengers should also be involved with the strike given we outnumber the driver on each journey. The bus slowed due to work on the roads. Hot tar boiled alongside the road and then spread onto gravel. At least out driver today drove in a less suicidal fashion compared to his Vietnamese & Lao counterparts. He drove at an appropriate speed and stopped at a temple along the way to pray and ring a bell putting me at ease.

Madikeri was larger than expected given it was just a hill station between the larger cities of Mangalore and Mysore. Madikeri had fresh mountain streams (filled with rubbish) and cool mountain air. Sadly, Alex & I checked into a humid and smelly room with a fresh coating of toxic paint.

Alex & I ate an uninspiring lunch. After 30 minutes of exploring, Alex needed a second lunch at a small canteen run by a muslim man. He introduced himself and offered to show Alex the tricks of eating fish off the bone (assuming Alex didn’t already know how). I ordered a coffee excited to drink a fresh brew after passing several places processing and grinding beans from nearby plantations and was given a fresh spiced cookie for free to accompany it.

My boyfriend and I have gone a week without incident. Despite the ample calories in Alex’s belly, I was starting to see the signs of grumpiness approaching and took time to roam the streets solo. I walked up the hill and found a cool museum housed inside a decommissioned church. Next, I checked out Raja’s seat and walked along a trail that gave me a view of the valley below. I passed a school on my way down the hill as the kids were letting out. A bunch of kids greeted me with a bunch of heelloo’s.

Around 4:20, Alex was ready for his afternoon snack. I tried a barfi, contrary to it’s name it is an Indian sweet that looks like a chunk of fudge made from ground up pistachios or cashews. 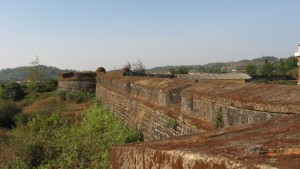 Alex wanted to check out the Madikeri fort that occupied most of the hillside. Alex & I walked on top of the walls of the fort but the interior was not up for inspection because it served as a prison. In my opinion, not a bad way to reuse old fortresses. See some of the inmates below smiled and waved at us.

Alex was eager to check out the adjacent museum then ranted when he saw that another American had visited the museum that day. The Westerner’s name was Kristen Smith, the alias I always use when an unknown man asks my name in a bar or a random museum docent asks me to sign a roster. I giggled to myself. 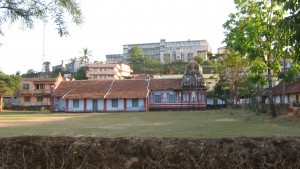 A local directed us up a hill that went nowhere of note but it was a nice neighborhood with friendly people. At the base of the hill, we met an Indian man who collects coins and stamps who wanted us to join him at his house for a chai. Per usual, Alex declined the warm invitation.

As soon as the sun went down, the mosquitos came out in full force. We woofed down dinner and retreated to our guesthouse. The room was equipped with a TV but not a mosquito net forcing us to keep the windows shut and endure the smell of the shellac. For entertainment, we watched the only English broadcast we could find: American Idol. Surprised Alex was up for a Western Show.