The hotel’s check out time was at 9AM. Instead of being annoyed, Alex & I were happy to have an incentive to get up early and head out. After breakfast, Alex being well-fed and cleared headed suggested the most efficient route rather than the cheapest route. Did someone switch my boyfriend with a mild-mannered clone as I slept last night? Instead of catching a bus to the bus station, we bargained with a rickshaw driver to take us there for $4. After the driver dropped us off, I looked back and saw him take the money to his chin and then to the wheel and back a few times. Was this his way of giving thanks? Were we his 1st passengers of the day? Was this good luck? 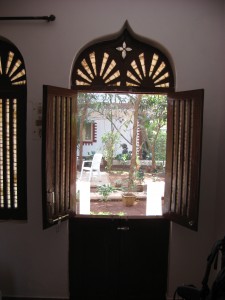 Our new town was only about 15 kilometers south of Panaji. We checked into a charming guesthouse with the cleanest and most secure room yet. The door had a high security lock but it was a split door. The bottom half of the door could be closed to keep cows and critters out while the upper half could remain open to allow fresh air in and provide a view of the beautiful garden.

After getting settled in, Alex & I ate lunch on the beach at one of the many beach shacks. The higher than usual prices on the menu reflected we were in a more touristed area. For the second time today, Alex did not complain about paying a bit more. Our noodle dishes were tasty and the scenery was stellar. As we ate, I watched a person parasailing and wondered if he or she had a death wish to brave parasailing in India. The person almost got dumped into the water several times.

The sand on the beach was red, reminiscent of one of my childhood beaches in Florida although with more rubbish. Women covered in conservative saris gave massages along the beach to scantily clad Westerners. Flabby older men wore speedos with their fleshy female companions who were topless. The dogs were a happy sight since they looked fed and less mangey than their Mumbai cousins. There were a few touts on the beach but they were not as annoying as those found in Mexico, Thailand or Vietnam.

After surveying the beach, we climbed the hill to Fort Aguada and lighthouse for a different vantage point of Calangute Beach. Prior to the summit, Alex’s mood turned south due to the trek and heat. He sat down underneath a tree to pout and complain. I kept walking and was rewarded at the top with a breath-taking view and a refreshing cold bottled water bought from a self-proclaimed “good boy”. I wanted to take a photo of the lighthouse for my mom’s collection but Alex once again had the camera.

Alex had not waited for me as promised but I was unfazed. I made plenty of new friends on the walk down who shutting me “Heeeeellllllooooo!” as I passed. The way I was being addressed reminded me of the Seinfeld episode “Hellooo”.   I laughed to myself along the walk “Heelllooo La la la!”

Alex & I reunited to go on a walk on the beach for the walk. The sunset was a disappointment because the fog disrupted the view of the sun sinking into the water off the horizon. I had hoped to see the same red intensity I’d viewed from the train platform 2 nights ago reflected over the water. A beached boat, The River Princess, along with the fog gave the beach a spooky vibe. Oh well, it was still serene enough for me. I was happy to be sitting on a sandy beach rather than a smoggy city.

Alex back in Economist mode found an inexpensive local restaurant during his afternoon explorations. He ordered the usual fried rice. Forgetting the fact I said I’d go veg in India, I ate a fish thali that blew my mind.

Going to sleep, I realized we’ve switched from city to serene. Instead of hearing a cacophony of noise from honking horns outside our window, I listened to a symphony of crickets and crashing waves.