My last night’s sleep in Goa was not the best. The previous few nights I had peaceful sleep listening to the crashing waves and feeling a beautiful breeze waft in through an open window. Last night I only had the sounds of the whirring fan moving the otherwise stagnant stale air. Alex’s spartan cement room was lacking ambiance and a mosquito net forcing us to keep the windows closed for the night to prevent the mosquitos from snacking on us as we slept. What I was thinking when I agreed to leave my beautiful bungalow behind to shack up with Alex again? Why does Alex values cost over comfort? Alex had been paying less but had been staying in a closed concrete cell while I payed more for a breezy bungalow.

Alex & I made our last trip to our favorite Indian woman’s breakfast shack and ordered our usual tomato omelet. One thing I have really been missing is tomatoes, raw tomatoes The omelets were more like an flat egg pancake with the aforementioned tomatoes spiced up with masala.

After breakfast, I went to pick up a short cute and colorful hippy dress I had been eyeing. My strategy to the shop immediately after breakfast was the shops were opening & I wanted to get the first customer of the day deal. Of course I payed more than what a local would but given the skimpy nature of the dress compared to the coverage of a sari a local would not be buying this anyway. I paid $4 for a dress which was totally worth it. I’ve been wanting to find a dress since my spa day in Bangkok so I could feel pretty again rather than feeling like a skanky backpacker.

One of my friend’s used to call me Kinetic Keren since I always am full of energy and desire to be in motion. This morning I realized my friend’s nickname was appropriate. While I thought Palolem was beautiful, the past few days I was feeling restless. I tend to be happier when I’m in motion or moving toward something: goal or destination. Now that was are leaving Goa, I am excited again. My state of mind is positive knowing we are about to explore a new frontier. A new state: Karnataka. 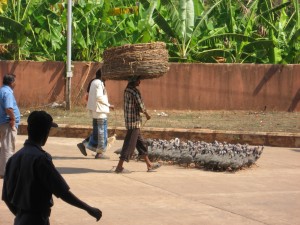 While we were waiting for our bus at the Canacona bus station, an incoming bus arrived with loads of large round baskets atop of the roof. As we watched the unloading, 2 of the baskets were filled with chickens. Once off the bus, the caretaker of the chickens let them out of the baskets and herded them like sheep onward to their next destination on foot while carrying the 2 baskets on his head. I guess these would be considered free range chickens?

Before coming to India, l pictured dry and dusty landscapes. Even after a few weeks of being here, it still surprises to me to see such lush green scenery. As we ride along the windy roads south through the vibrant green thick foliage we get glimpses of the Western Ghats, the mountain range to the east and the blue waters of the Arabian Sea to the west whenever there is a break in tree cover. Our bus driver appeared to have gone to the same driving school as our Lao bus driver who drove us from Vientiane to Luang Prabang. We had several close calls as the bus careened around blind corners. On one near miss, the driver of the other bus came so close that he spotted my blonde hair and eagerly waved hello.

Alex & I had to change buses at Ankola and wait 2 hours for the next bus to Gokarna. The bus station had a restaurant that served up a legit veg thali with 2 men walking around with buckets of curry to refill any compartment on our steel trays that may be running low. Alex, a man who has been kicked out of his far share of Chinese buffets for eating too much, was in heaven. He not only got 2nds but 3rds for 20 rupees, $.50.

When Alex & I boarded the bus for Gokarna we selected a bench at the back of the bus near the back door. We had ample leg room using our packs for a footrest for the first 5 minutes. As the bus rolled out of Ankola, it made multiple stops. At the market, people boarded in droves. Our prized area was also a favorite spot of the ladies coming from the market. The women set down their baskets covered in fish goo right on top of my legs. I was thankful the bus ride was only 30 minutes we were literally packed in like sardines with sardine juice dripping down my legs.

Gokarna is a compact pilgrimage town. We found a great guesthouse less than 500 meters from the bus station at Gokarna International. The name makes it sound way more luxurious than it actually is but it was lovely. Alex & I were led up 3 flights of a grand marble staircase to a spacious double with a balcony that offered a fantastic views of the city and street below.

Alex & I fell in love with this town instantly. It was the India I had pictured: there was only one main dusty road connecting to narrow maze-like alleyways. Cows roamed the open sewer-lined streets wearing beaded necklaces. Women and men were dressed more traditionally. Women in sari’s. Men donning dhotis, a man skirt, with button down dress shirts.

Gokarna was more of a pilgrimage town for Indians than westerners. There were still a few Westerners but most were on more on the hippie-backpacker spectrum than fat packaged tourist. The shops catered to locals and pilgrims selling souvenirs consisting of prayer beads and figurines of Hindu gods.

The law of inertia states the tendency of an object to resist a change in motion unless acted on by an external force. Kinetic Keren usually likes to stay in motion but Gokarna is a place she would like stay at rest for a few days.

1 thought on “Change in Motion. Change of State.”