Today Alex & I rode on the 1st large bus suitable for full size people to take us the short 2 and a half hour ride to Hue. After only 45 minutes, the bus made a stop at Marble Mountain for what I thought it was just a short pee break. Neither Alex nor I heard we had 30 minutes to climb the steps into the caves. Instead, we had the pleasure of getting harassed by touts for 30 minutes trying to sell us marble trinkets. Why do people think that just because we are white that we want to buy cheesy shit? Given Alex & I have made our way up steps to Batu Cave in KL & Tiger Cave in Thailand, we did not really feel like we missed out on anything.

Passing through Danang everything was on a larger scale. The city had the first “sky scrapers” I had seen in Vietnam. OK, not skyscrapers but the buildings taller than 4 stories. Even the basket boats appeared to be bigger.

On the bus/train rides, I never tire of the scenery. Although much of it looks the same in the cities and landscapes but at the same time, subtly different and weird oddities. The bus skirted along Highway 1 through lush green valleys. Mountains loomed above foggy lakes. Small bamboo huts lined the waterfront and rubbish alongside the road. Water buffalos casually walked through rice paddies. The scenery has a yin and yang element. The poverty yet the richness of the land. Alex thinks they need to abandon the agricultural roots for technology but I think it is good to have a fallback if the technology ever fails us. It is important to retain a close association to the land.

Arriving in Hue was probably one of our smoothest arrivals. Alex & I without reluctance hopped on 2 motorbikes that were ready to wisk us off to our guesthouse followed by a swift check-in. In what seemed like a blink of an eye, we were standing on the balcony of our room overlooking the street. I felt like we’d been transported to Paris. 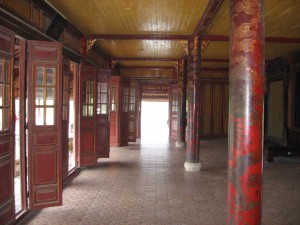 After lunch, we went to check out the walled city and former Emperor’s Palace. Now I felt like we were in China. I’m coming to realize the architecture in Tokyo & Hoi An is in fact derived from China. After India, it I have any energy left, I would like to visit China since it has influenced so many other cultures in this region. 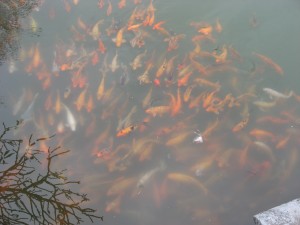 The palace was grand with a large courtyard with ponds filled with koi fish. The main buildings were cool but my favorite part was the ‘ruins’ near the exit. Technically, I think they were off limits given the steps were in such disrepair and the wildflowers surrounding the former structure perched on the wall. The ceiling was missing but the walls and columns remained with the tile floors fully intact. Here, I had my moment of zen. Later I learned this part of the palace was severely destroyed during the Tet offensive. 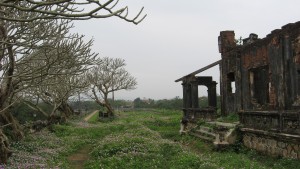 Alex & I had our daily afternoon coffee underneath trees alongside a canal where Alex spotted a water snake. We watched it slowly swim in the water as our coffee slowly dripped through the small metal filter on top of our glass. Drinking Vietnamese coffee is a process. Having to wait for the coffee to seep through the grounds forces me to stop and relax. 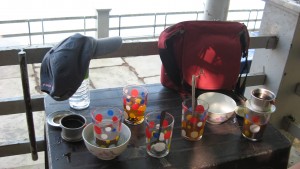 When we returned to our guesthouse, we found our key securely resting inside the keyhole of our door. The owners had taken the opportunity to paint our room while we were away. We slept with the door and windows open so we would not get sick from the fumes. The inconvenience got us a free breakfast the following morning.

1 thought on “Making our way to Hue”