Today is the start of a 2 day tour of the Mekong Delta. After being in Asia for 2 months, I am used to nothing being on time. Alex was irritated this morning when at the stroke of 7AM breakfast was not ready. He likes to take everything slow but feels everyone should jump at his command. For the next 2 days, he is not in charge. I am excited to see him squirm and have to deal with someone else calling the shots.

Despite it being a 3 hour ride to Cai Be to connect with our 1st boat, I did not crack open a book because I found the scenery captivating. Oddly, Thailand looked more what I expected Vietnam to look like however I later discovered Thai rice production is 2nd to Vietnam. The landscape was green but not with the same intensity. Perhaps I was not expecting anything else than seeing rice paddies within the Delta. Small towns and villages sprouted in between fields. People were transported sans petrol via cyclos with the drivers pedaling away. Women wearing conical hats as they carried 2 baskets filled with goods balanced on a stick on their shoulders much like oxen.

We got off the bus at a small village. Trang, our tour guide tried his best in his awkward English to show us how coconut candy is made which looked a lot like saltwater taffy. I was not impressed and neither was the harder to impress Alex. Since we both like to get stickers from our dentists for not having cavities and for being good flossers on each visit, we refrained from tasting. In the next ramshackle building we were shown how they made popped rice aka Rice Krispies. Meh. What’s next?

Jackpot! Trang passed around several bottles of rice wine. Some had cobras. Some had scorpions. Some had honeycombs with a few floating bees. Trang told us the fermentation process for the rice wine is done with the help of the bees. Only an old British man & I were brave enough to step up to take a sample. There was no bee stings, just a sweet sample of something that tasted like sake! Kanpai! Alex glared at me. I thought if we were all given samples as we walked out of the bus, the previous 45 minutes would have been way more interesting. Plus, this is something they need to sell to Americans leaving the museum I visited yesterday.

After the demonstrations, there was 15 minutes allocated for free time. This meant: wait in line to pay to pee or wait around and get bombarded to “Buy something.” 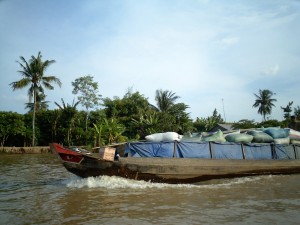 There were 30 people on the tour. We boarded a big wooden boat and took a ride down the Mekong. This area was breathtaking. Although there was the greenery of the adjacent rice paddies, palm trees, banana trees along with other vegetation it was not green enough in my mind and with help of my polarized sunglasses. According to The Bible aka Lonely Planet, this was the beginning of the dry season. My cynical side wondered how lush it could have been before the US mucked it up with Agent Orange. My optimistic side saw the brown water as nutrient-rich rather than the polluted Bangkok way. Unfinished wooden boats floated past us. The only painted portion was the stern which was with two large eye balls. I hoped this was for superstition rather than for navigation purposes. 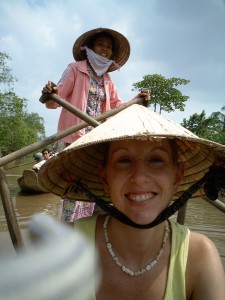 Next, we were dispersed among several smaller rowboats to weave through the small channels to a pioneer-type village. Alex & I joined another couple in a  boat rowed by a tiny but tough Vietnamese woman. She gave us traditional conical Vietnamese hats to wear to protect us from the sun during the journey.

Lunch was bland to cater to the Western palate. Freaking pasta? The basket of rambutans served at the end of the meal as dessert was the only redeeming part of the meal. I originally thought they were lychees. The difference between a lychee and rambutan is the lychee ha a rough red inedible shell while the ramubutan has the same white sweet fleshy seeded fruit inside but has a hairy muppet-like shell. To eat a rabutan, you crack open the skin and gently bite down on the white juicy fruit. Beware of the seed inside. It is kind of like the mango with a pesky seed. After the first taste I promise you will be hooked. We ate our dessert with a grumpy French couple seated at our table. They told us we were wise to travel from South to North as it is much prettier up north. We took their comments with a grain of salt since most French people we’ve met have done nothing but complain. 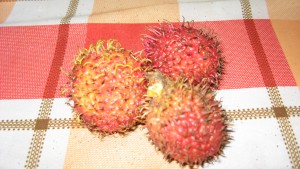 After lunch we were given plenty of free time to shop. Alex &  I grabbed 2 bikes instead. We cruised around the entire island of Ah Binh Long. I was thrilled to hop on a bike again and realized this was the first time on this trip. At the end, Alex saved a beetle. It reminded me of the reason I fell in love with him. Shortly after we first met, he rescued an injured squirrel and tried to nurse the critter back to health with a Twinkie.

In the afternoon, we boarded the boat onward to Vihn Long. Once there, we had 30 minutes to check out the market. It was different but not. Spotted fish and snakes wriggling on the counters or in pools. As a vendor tried to weigh a fish for a patron, it flopped off the scale and hit a lady in the face. Everyone laughed. This is what I probably like the most about Asia, crazy shit happens and people share a moment together in laughter.

Before boarding the bus, I picked up a pineapple and sprinkled it unconsciously with chili. Vietnamese bystanders noticed and gave me a thumbs up. I wonder every time who is amused more. Me or the observers? Do they secretly hope I will combust as I consume the chili?

The bus took us to another boat for a sunset cruise to Can Tho were we would stay for the night in a hotel. The waterway had quieted down but the city was bustling. It was the largest along the Mekong Delta. Can Tho reminded Alex of a hybrid of Brighton and Kuching. Alex & I were glad dinner wasn’t included. This meant we could get a delicious rather than bland meal. We ate dinner at a pho stand on a side street near the hotel. The mamasan of the stand watched over us to make sure we were eating properly. After inspection, we were allowed to proceed.

Before going to sleep, I thought about the day. Today, I was not awe-inspired from the sights. Am I turning into a jaded traveler?

1 thought on “Meandering down the Mekong”