Our wake-up call and morning arrived early at 4:45AM. The family was up to send us off with our egg sandwiches ready to go. Once the taxi started on its way, I noticed how many people were up before the sun. Hoards of people were exercising along the beach at 5AM in their pajamas. Really? Shit! I hate running in the morning. These people made me feel like a slacker.

The bus was much bigger than the Quy Nhon bus was 25 seats versus 10. Thank freakin’ God! The bus left exactly on time. It is weird we talk about Asian time in the States. Everything was working according to clockwork. Kids biked to school pedaling at the same time (2 on 1 bike). At first the radio was broadcasting the news which made the scenery seem more depressing. Soon, the music changed to what I can only describe as techno-polka. With the change of music, the scenery seemed to improve. The landscape went from emerald green to almost florescent.

The local buses make frequent stops to pick up/drop off people….and other packages. One stop a local man gave our bus driver a large box and some dong to transport it a few villages away. Periodically, I heard the sound of baby birds. I was thinking they were about to get run over by our bus. Later, I realized they were actually on the bus when we stopped a few hours later and handed over the box. I’ve heard of chicken buses in Central America, we were riding in a chick bus.

We made a stop for a makeshift bathroom break: men relieved themselves over a cliff and the women waited to use a cement cubicle fitted only with a drain. While I waited my turn I watched a man still wearing his pajamas trying to herd a bunch on rambunctious adolescent cows that looked like they may have found some coffee beans to eat past our “toilets”.  Alex & I savored the scenery reminding us of our stop in Big Sur California before getting corralled into the small minivan/bus again.

Our bus did not take us directly to our destination, they dropped at the junction along Hwy 1 for us to take a taxi into Hoi An about 14 KM away. Like in Thailand where buses come in many forms, here taxis are the same. Here in Vietnam, a taxi can be a cyclo or perhaps a motorbike. This time, both Alex & I were in denial waiting for a proper taxi. The surrounding mototaxi drivers watched us with amusement until we gave in. If you think that motorbikes cannot take a large load, you have never been to Asia. We somehow managed to get all of our belongings on 2 motorbikes. Of course families of 4 and their cargo can fit onto a motorbike. The drivers held our large packs between their legs while Alex & I clung onto them for dear life and hoped for the best as they raced towards town trying to avoid obstacles along the way…like a herd of water-buffalo casually walking across the road.

Whew! We made it to the Dai Lai Hotel. This was the fanciest hotel yet: AC, TV, hot water, balcony, 2 large beds, mosquito nets, desk and mirror with armoire for only $7.

The town was cute, yet touristy. If I was heading back now, I would have been doing some serious shopping. Ceramics, lanterns, dresses-to-order, etc. My friend Alexandra had come here a year ago and got several suits and dresses made to order. However, getting something made-to-order does not impress me because I grew up with my mom making anything I could imagine. She made all my formal dresses, both Bridal dresses for my brother’s weddings including bridesmaids dresses. If you design it, she can make it. I’m not being a cheap tourist, I just have connections! 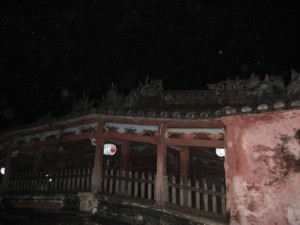 The town seemed to look like it had a Japanese influence given one of the bridges is a Japanese covered bridge. However, according to what I read about the history it was more influenced by the Chinese. Whatever. It’s a cute town. It’s Asian. I like it! We at dinner at an old restaurant with good ambience and food. I tried Cao Lau a noodle dish specific to Hoi An. After dinner before we even left the restaurant we were borderline narcoleptic given our early start to the day. Instead of further exploration of the city, we headed back to the guesthouse to explore the inside of our eyelids.  .