Like most of the arranged tours in Vietnam, we rose before daybreak to climb into a small van built for Smurfs. This morning we were headed to a junk boat awaiting us 3 hours away. The vessel is called a ‘junk’ boat but it is nothing you would find in an American junkyard. Our boat, along with the countless others that would join us, was made out of sturdy wood and canvas sail. Stepping aboard I trusted its sea worthiness. 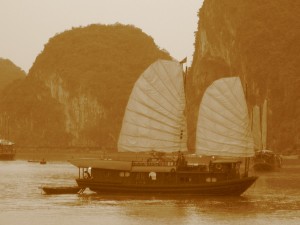 Once on the boat, I met an American Mormon from California who is teaching English in Korea. As we ate lunch, I chatted with her feeling jealous of her and other people traveling alone. They have the freedom to get to do whatever they want without someone nagging them incessantly. They also have the freedom to meet new people for companionship and sever ties whenever they feel like it.

Even though I had internal feelings of discontent, my external surroundings were nothing but serene. Although Alex was playing with the camera and taking photos in sepia tone, the coloring was much different. The sky was overcast so everything had a blue-grey appearance: the sky, water and even the ever-green limestone karsts. Until now, I was unaware of how much city sounds have been bothering me. It delighted me to hear only one motor rattling from our boat compared to the thousands scooting around us in the city all hours of the day.

Ha Long means “Bay of Descending Dragons” perhaps from the appearance of the limestone karsts that jutted out of the South China Sea looking like teeth from the mouth of a dragon or its spiky spines on the back and tail. 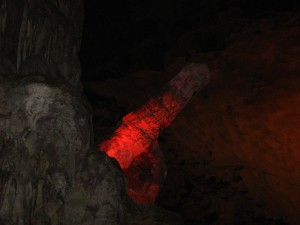 Our boat made a stop for us to explore a cave but it was really nothing to write home about. Manicured cement steps took us briskly through within 10 minutes. The only bit that provided me amusement was a penis shaped rock that appeared to have an erection lasting more than 4 hours. Perhaps the doctor should be called.

After our cave tour, the boat stayed anchored for the opportunity for those who cared to go kayaking. Unfortunately, I cared to go but  Alex did not. Despite that, he climbed into the kayak donning the Captain’s hat. Our guide told us we had an hour and a half to explore. Alex & I were gone 25 minutes max. Does he get sick pleasure from ruining anything I may enjoy? Alex did his best to be an utter asshole and to ruin my experience by making the trip unenjoyable making us return to the boat early.

I was fucking livid. The whole time in Vietnam, I’d been looking forward to getting out in the water. What the fuck? I watched the Mormon girl happily gliding solo across the water weaving through the limestone karsts in the distance while I sat paralyzed on the deck fighting the tears that wanted to stream down my face. Yes, theoretically I could have taken the kayak back out solo but I was too upset and mad to function. My boyfriend was an uncaring dictator who felt could rule my world.

Right now, I feel like I am sounding like a drama-queen. I’m upset because Alex & I had created a contract prior to setting off on our journey. We broke down what our roles and responsibilities would be and what activities were in the must do list. Alex agreed to my 4 measly requests: ride an elephant, take a cooking class, kayak when possible and attend an ashram for 1 week. So far, my elephant ride and cooking class I wanted to do in Chang Mai was postponed/vetoed. “Later.” Today, my kayak trip was terminated early due to his whim and crankiness. If there was a dragon in Ha Long Bay, I wanted it jump out of the water and eat him for a snack so I could finally be set free. I felt like a prisoner. Alex breached our contract. When Alex & I first met, we had 2 kayaks that we’d take out in the ocean or mangroves whenever we had free time. Why was I fighting to get an hour? 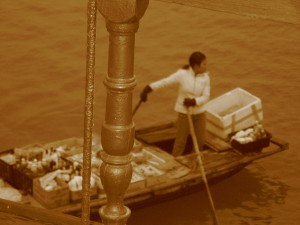 My Mormon friend was not the only single lady roaming the seas. My brooding was interrupted when a woman rowed up with her tiny wooden boat filled with bottles of water, Coca-Cola, Sprite, Saigon and Tiger beer. I could not help but laugh. Even 3 stories up in the middle of the sea [nowhere] we still had someone chasing us down asking us to “Buy something.” 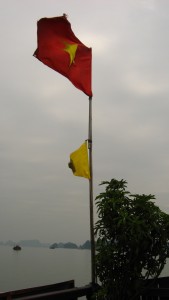 Even though I was stuck on a boat with a man I hated, at least there were other people to interact with: Angelica the Mormon and a French couple over dinner. Being Christmas Eve, I was in a festive mood. Unfortunately, our crew was worthless. There was  a giant box for tips prominently displayed but they didn’t realize they needed to work for it. If the crew was interested in making serious tips, they should have made a bigger deal out of our holiday. Across the water, I heard other boats playing Christmas music and singing Christmas carols. This is when I realized the irony. I’m usually the black sheep trying to avoid celebrating Christmas but tonight I wanted it more than ever. Hearing the singing made me want to jump into the water and swim the 50 meters to the fun boat. Really? Why am I trying to be culturally conscious in my travels if I can’t get a little love as a tourist? They should be fucking catering to us rather than drinking from their bottles of whiskey and watching a stupid movie in Vietnamese none of us understand dammit!

I’ve never felt homesick before. Currently, I do not know where home is. It’s not Florida. It’s not DC. It is not here in Vietnam. I just wanted someone to give a shit. Even though I consider Florida the heart of darkness, I longed to be there with my family who understand and love me unconditionally. For the first time in a long while, I actually wanted to celebrate Christmas. Wow! Nothing like going to the other side of the world to gain perspective.