5:45AM came too soon for me. Alex was in hyperdrive. It is rare for him to have more energy than me in the morning. We grabbed Birdie coffees from 7-11, chicken & rice from the chicken lady and dashed to jump on the 1st #53 bus to the train station in order to catch the 7AM train to Ayutthaya. Ugh, traffic! We arrived in time to catch a glimpse of the train leaving at 7:01.

Another train left in 45 minutes. The fare for a 1.5 hour ride in 3rd class was only 15B. I love riding trains. Although we swore we’d never ride 3rd class again on an overnight journey, day trips are fine. Third class cars have a more lively atmosphere packed with people. Never a dull moment. Alex & I didn’t have assigned seats and ended up getting bumped out of a girl’s seat who did. I guess this annoyed the surrounding riders since no one else sat in the vacant seat. As the train chugged along, we passed shanties that lined the tracks. Thais were back in Monday morning mode. Vendors prepared their street carts for the day. Dogs even looked a bit more serious as they scrounged for scraps of food. Outside the city in the countryside, people were already hard at work in the rice paddies.

Once in Ayutthaya, the touts didn’t seem to get the memo it was Monday as many were still sleeping in their tuk-tuks rather than greeting the arriving train. Alex & I made it out of the train station and to the river ferry unnoticed. Alex with his bottomless stomach was hungry again. We stopped at the first available restaurant. It was painted pink and decorated in a Hello Kitty theme: curtains, napkin holders and aprons. Alex ordered a chicken noodle soup. When the soup arrived, it had bonus bits: chicken feet and necks.

Alex & I ambled around Ayutthaya, one of Thailand’s original capitals before it got burnt to the ground by the Burmese. Looking around, it is hard to believe this was once the largest city in the world in its heyday. Here, there was no hustle and bustle like the current capital. Everyone moved in a very unhurried pace.

In one area, there was a row of street stands selling nothing but candy floss. Picture cotton candy twisted into colorful strings. I thought the name was derived on what you needed to do after consuming this treat. It looked too colorful to eat much like the spirit bread in Borneo. Was this spirit string? 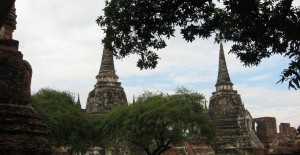 Ayutthaya reminded me of Rome for the reason ruins of the city’s former glory were scattered all over the city: in people’s back yards, next to the hospital, sprinkled in the park and in walled ‘tourist zones’. The former chedis were easy to spot. Instead of the smooth gold leafing over plaster we are accustomed to seeing, there were rugged with exposed brick. Some of the ruins were engulfed by trees or other vegetation.

Alex was reminded of his hometown in Florida 10,000 miles away. Clean, fresh air, with gentle breezes that periodically interrupted the oppressive heat. Large swaths of grass with patches of sugary sand equipped with sand-spurs.

Both of us became somewhat disoriented from the heat. Walking down a desolate residential street, Alex’s eagle eye spotted bottles of Pepsi. A man was selling Pepsi’s out of what was basically his living room with a rolling metal door. When Alex went to buy one, the guy looked panic-stricken. Apparently foreigners rarely or never walk into his “store.” He looked relieved once Alex pantomimed what he wanted. He smiled exposing his one tooth, grabbed 2 ice-cold Pepsis and invited to sat at the front table of his store.

This innocent desire to have a drink turned into a major event. The man summoned his friends who gathered around us. One man pulled out a pack of cigarettes. He offered us one before sharing with the other members of the group. The owner disappeared. Only one man spoke a little English and served as the translator. He erroneously decided we were from New Jersey. The owner soon returned with a camera and 2 Buddha medallions he presented to me and Alex. The translator took our photo. Later Alex joked that perhaps one day we will return and see the picture framed on a wall to commemorate the visit from the American couple from New Jersey.

We hung out for a bit longer but bid farewell before they cracked open a bottle of whiskey. This interaction was a good reminder the road less traveled can offer you much more. Also, Pepsi and Coca-Cola can unite cultures.

The Pepsi quickly ran its course. I needed a bathroom. We found the “Tourist Info Center”  before I resorted to peeing behind one of the ruins which is probably frowned upon. It provided relief from the heat and for my bladder. Once outside, there was no doubt we were back on the tourist trail. Pasty Westerners were everywhere riding bikes and elephants. I would swear that a few of the elephants were the ones who performed in Bangkok yesterday. 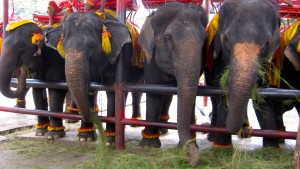 We paid to enter 2 wats: Wat Phra Si Saphet and Wat Ratburana. The first wat was home to a 16 meter (~53 ft) tall Buddha covered in gold before the Burmese set fire it to melt and salvage the gold. Now, it is just a pile of bricks.

Wat Ratburana we explored in depth with an unexpercted tour guide. Alex & I made an acquaintance with a cute dog I later named BoDOGsattva. She led us along the path through the ruins and up some of the steps. The ruins reminded me of the Roman and Mayan ruins. It always makes me think that humans try so hard to make permanent structures only for the earth and trees to reclaim it’s territory. We are made from dust and dust we shall return. 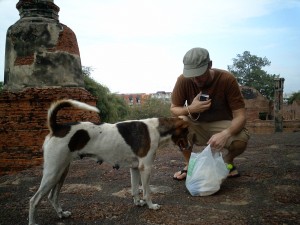 As we made our way out the gate of Wat Ratburana, BoDOGsattva followed us as if it was our turn to liberate her from the ruins. We crossed a 4 lane street. Bodogshiva braved the busy traffic to cross over to us. As we boarded the ferry, she turned around and headed back in the direction of the ruins. Perhaps to lead others along the path.

On the train ride back, we met a German and an American from LA. We chatted with them from Ayutthaya to Bangkok. The German works for Volkswagen in Beijing. The American’s travels was taking him through Thailand for a month. As I meet other travelers, it feels much like my former job as a sales rep: brief interactions to exchange information or stories and then move on. Once in Bangkok, we headed our separate ways.

Over the past month and a half, we have discovered budget travel teaches you patience. As we waited at the bus stop, a taxi driver approached me. He wanted 400 baht ($10) to take us to Tavee. The bus fare for both Alex and me was 40 baht ($1). I smiled & countered, “Sip-see (40) baht.” He smiled drove away. We waited an hour for a bus that is supposed to arrive every 20 minutes. The bus came just as we were about to lose hope. The driver turned off the lights as he dropped us off at the corner of our neighborhood. We had caught the last bus for the evening. I’ve closed down bars, but never a bus.

5 thoughts on “PASt, Present & PEPSI”