I woke up excited to go to Pee Pee. Many people call it Fee Fee but it is actually Pee Pee…Koh Phi Phi! A songthaew shuttled us out of Phuket Town and to the ferry. On the ride, we met a British couple who only had a 2-week holiday in Thailand. It was odd to have the role reversal. Usually the British were the ones with a year and the poor Americans with only 2-weeks.

The ferry looked like a normal modern ferry with 3 levels. I am not sure why I was surprised. What was I expecting, something that looked like the Nina, Pinta or Santa Maria?  As we boarded, everyone received coffee and croissant. Alex & I took a seat on the 2nd level by the window to take in the view. 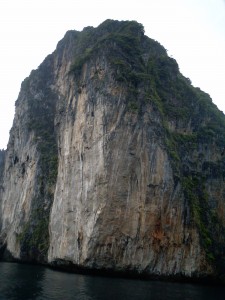 On the ferry ride to Koh Phi Phi Don, the boat looped around the beautiful and uninhabited Koh Phi Phi Leh. Although it is uninhabited, this island is home to the idyllic beach captured in the movie The Beach. Just like in the book & film, paradise gets discovered and ruined. From our boat, I watched countless tour boats shuffling people into Maya Bay and onto the shores of The Beach beach to capture pictures. Seeing this, I felt almost as uneasy as Richard did when he sees the newcomers who followed his map to the island. Paradise rarely goes undiscovered for long. Once it is found, soon enough word gets around and it becomes paradise lost. I had to look away.

I never tire of viewing the cliffs. Ladders hung along the face of the cliffs used to collect bird nests for bird nest soup. I have a feeling the men who dare to climb these ladders and retrieve these nests must think the soup tastes amazing enough to take the risk or get paid a pretty baht. 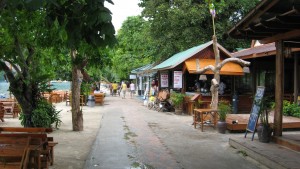 Monsoon rains unleashed their wrath upon our arrival to Koh Phi Phi. Near the docks we were able to have partial shelter underneath the awnings. As I passed a PADI shop, a gorgeous tan man with spectacular abs handed me a map of the island. As I locked eyes with him my first thought about the island was, “Thank God!’ Young attractive people!”

Alex & I, per usual, had no reservation while the majority of the guesthouses & bungalows we passed had No Vacancy signs. We trodded up the beaten and bruised path and literally got the last bungalow. The owner of Valentine Bungalows did not look like the typical slender Thai lady. She looked more like a Hawaiian, short and fat. It took great effort for her to show me the bungalow. 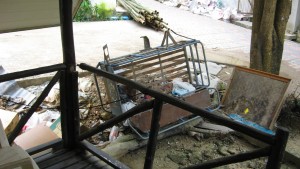 While I felt lucky to score an accommodation, I was not pleased with all the rubbish such as broken paintings, branches, furniture, shoes, and an overturned market cart surrounding our bungalow. Our bungalow, was situated at the top of a slight incline and the base of where the hill becomes steep. The post-tsunami rebuilding was going on all around us with vigor.The sound of hammering filled the air. Peak season is rapidly approaching. I watched young men push heavily laden carts of cinder blocks and bags of cement up the hill. Most stopped to rest in front of our bungalow or lighten some of their load before heading up the steep hill behind us. This is when I deduced our bungalow must sit where the infamous 2004 Tsunami wave stopped. It is the only reason I could think for handcart that could be put to good use was abandoned. Was it bad luck to remove? Since I’ve had recurring tsunami dreams all my life, I was happy to be on higher ground and next to a steep hill I could run up in event of an emergency.

Once the rain ceased, we hit the beach. The sun was beaming. It took only a few minutes for the town to dry out. What rain? The sands were a pristine white. The water was crystal clear pale blue-green hue. Everything was framed between the 2 gigantic limestone karsts. Paradise! I walked about a 100 meters in the water but it remained shallow barely making it over my knees. I looked around the beach. If Phuket is Can Cun, overdeveloped and full of old package tourists, then Koh Phi Phi is Playa del Carmen, somewhat developed and full of younger attractive people.

Alex suggested that we drop off our stuff so we could flop around in the water. Bait and switch. He diverted me up the hill to the high point of the island. Along the hike up the hill, we passed baby and full-grown turkeys running among the coconut groves. Free range Thanksgiving turkeys! At the top, a friendly Thai man at the top greeted me 1st in Spanish, then German, then in a British Accent. Finally, I filled him in on my secret, “I am an American.” He laughed, “HEH-loow!” 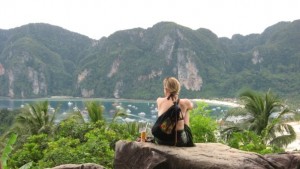 I sat atop a rock overlooking the narrow sliver of the island. I was thankful we were staying on higher ground. Looking below, it was hard to believe how quickly this island was devastated. The Tsunami ravaged this island in 3 minutes and it has taken 3 years to rebuild. No pictures or words can really capture some moments. Sitting on the rock overlooking the island, I sat in a zen-like state surrounded by beauty content and care-free.

For dinner, Alex & I found a tiny stall that fit only the 2 of us plus staff. We had scrumptious squid with fried rice. While I enjoyed trying all the new cuisines in Malaysia & Singapore, I really missed Thai food and was happily devoured my meal.

We watched people pass as we ate. Alex always gets a chip on his shoulder whenever he runs into other backpackers. He was irritated there were so many Westerners living and working here. There were dive and yoga instructors, people making and selling jewelry, working in internet cafes and cafes. They are doing anything they can to stay in Thailand. I asked him, “Why do you care? You judge people who are solely interested in accumulation of wealth and status. These Westerners gave up everything just like we did. They found a place the makes them content enough to stay.” He got silent. I think Alex is jealous he has not found his happy place. Will he ever?

Was this my paradise? Not really. I don’t see myself setting up shop here but I would be content hanging out here for a bit. Koh Phi Phi was a beautiful island filled with attractive young people and plenty of water activities for me to enjoy. I am happy anywhere because wherever I go, I strap my pack to my back and carry my happiness within. My only source of discontent is the excess baggage my travel partner is forcing me carry. Every time I move to a new place, I strongly consider leaving that baggage behind. Soon, I hope to be lighter.