Due to the hostile sleeping environment, I probably got only 2 hours of sleep. Today we land on Koh Phangan in the Gulf of Thailand. Over the past year I read fictional travel books: The Backpacker & Backpack. Both described the island as paradise with parties. The famed Full Moon Parties. Koh Phangan is probably the closest thing to Neverland filled with backpackers who don’t want to grow up much like Peter Pan & the Lost Boys.

Five minutes before our scheduled arrival, Alex insisted we put on our packs and stand near the door. The conductor passed us and laughed saying something in Thai to the effect of “Not yet, chill out.” The train was behind schedule. I sat down to watch the sun rise over the Southern Thailand countryside. A few cows were in the fields that looked like the svelte Costa Rican cows as opposed to the portly American variety.

I am not who was more eager for us to disembark. Alex? Or the gang of touts awaiting the farangs on the incoming train? Even if the combo tickets were overpriced, they paid for themselves serving as a get out of jail free card allowing us to pass through the gauntlet with little trouble. We found the bus and the ticket was valid. We gleefully deposited our packs in the storage hold of the bus.

We read warnings in the Lonely Planet about people stowing away in baggage compartments to sort through packs and steal valuables. Before leaving Bangkok, we secured our bags with our pack locks to prevent any thief from getting inside. They also kept our bags from leaving the train while we slept since Alex locked them to the overhead rack. While waiting for the ferry, I discovered my pack was a wee lighter when I looked for my Swiss Army knife and it was missing. Alex checked his bag. His was gone. Both of us packed our knives in the outer zipper compartment for easy access. Apparently, easy access for others. Doh! Alex said, “I’m going to put dirty underwear in the outside compartment going forward.” At least we know the legend of the bus bandits is true. Despite taking precautions, we still lost our $80 multipurpose utility knives. Lesson learned!

Soon after boarding the plush ferry, Alex & I crashed hard. For lunch, Alex brought me instant soup. This was of the Thai variety of Cup Soup: spiced shrimp with a hint of lemongrass. Surprisingly, it tasted really good. 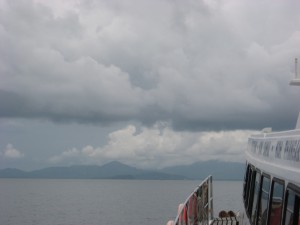 The 4 hour ferry ride flew by. Between sleeping and reading, I did not take in the view along the way. When I did take a peak, I was reminded of the vista of rocky islets popping up during my deep sea expedition off the Costa Rican peninsula but more magnificent. As we approached the island, I went to the top deck of the ferry. The 1st sight of Koh Phangan was breathtaking. The lush tropical mountainous island appeared as though it bursting out of the sea trying to reach out to the pure blue sky. The air was lacking the smoggy character I had grown accustomed to over the preceding days. Paradise is within my grasp.

The tag line for touts is “Where you go?” Like the arrival to Surat Thani train station, there was almost a 1:1 ratio of touts to farangs waiting on the dock. Like roaches, we all tried to scatter to avoid harassment. Persistent touts followed me and Alex to the ATM and 7-11. Alex did not keep a cool heart and snapped at 1 of the men. Bad move. That man turned out to be the only driver going in the direction we needed to go on the island. Needless-to-say, we lost our bargaining power as a result.The taxi was actually a pickup truck with 2 benches in the back attached to the truck bed called a songthaew. 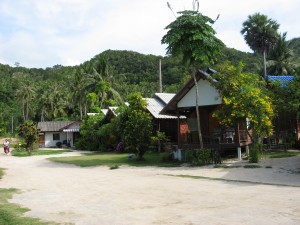 Finally, we made it to Haad-Yao! It only took an 17 hours by train, bus, ferry & songtheaw. The songthaew dropped at the top of the hill rather than giving us front door service. Thanks Alex! My dear boyfriend led me to the target bungalow by way of a circular route: Point A to Point A. The guy running reception was amused. He could tell I was annoyed with Alex. To be funny, he showed us a bungalow with separate beds first before offering us our preferred a double. Thais do have a playful sense of humor. I loved the guy already. 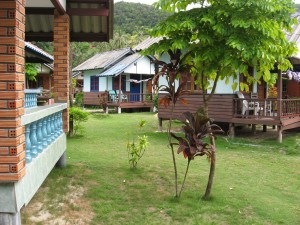 The challenging journey made the destination feel like a prize well earned. My mood immediately lifted. The bungalows were much nicer than the ramshackled bungalows in Tulum, Mexico. The bungalows looked much like the ones featured in the movie The Beach.  A wooden bungalow with front porch equipped with a hammock just a few steps to the beach. It was perfect! Yes, I have arrived. This is paradise!

The only downside, being so remote we were captives to the kitchen at our lodging. The food was not stellar. The menu was watered down Thai food for the westerner’s palate. Also on the menu was Western food. Burgers? Why travel to Thailand? The prices was almost triple to what we spent in Bangkok. Alex & I ordered the most inexpensive Thai plate on the menu: fried rice.

After lunch and a quick dip in the water, I was so exhausted that I passed out in the hammock. During my power nap. Alex explored the hillside. 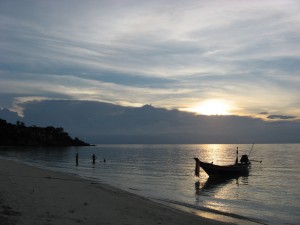 At sunset, we took a romantic walk on the beach like we used to in our courtship phase. Our bungalow guy seeing we liked each other again had his staff carry our table down closer to the water for dinner. Afterwards, we drank a few Chang beers watching the stars burst through the night sky. Island TV. After living in the city for so long, you get used to not seeing stars due to all the light pollution. It was like seeing stars for the 1st time.

Once inside our bungalow, it was so quiet. The only sounds were waves crashing on the beach & frogs croaking in the trees. I was startled when I looked out the window. I thought people were walking towards our bungalow with flashlights. After further inspection, it ended up being huge fireflies that looked a lot like fairies. Looks like Alex & I have stumbled into Neverland since we found Tinkerbell and friends.